although I don’t agree with Piers Morgan’s reason for finding the Priory school’s uniform policy absurd. It do agree this school has still got it very wrong. Is this really an attempt at a gender neutral school uniform policy, or rather is it a blunt tool to cover up female flesh to avoid addressing/ acknowledging the objectifying attitudes to women that continue to proliferate in society?

Priory School in Lewes said it made the change after concerns were raised over the length of skirts worn by pupils. 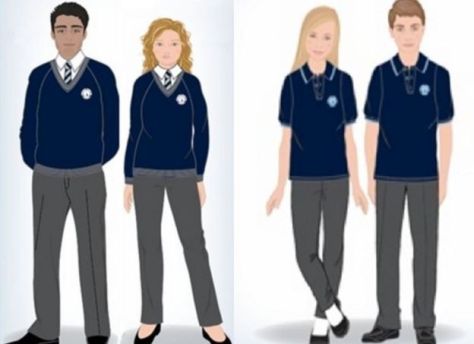 Examine the pictures produced by the school and ask yourself if it obvious which figures are boys and which are girls?

Of course it feckin’ is! The boys have trousers with a smart crease down the front. The girls have slimmer, figure hugging trousers. The girls wear ballet shoes, the boys big chunky shoes (this school is so behind the times, ballet shoes are so yesterday, DMs are where it is at for boys and girls and those who identify as a third gender, intersex or no gender). The girls have long hair, the boys short. The girls pose in a way that accentuates their little delicate, weak hands. The boys ram rod straight, their big, strong hands behind their backs or straight down their sides (a physical manifestation of holding it all in, even those really useful emotions of fear and regret and sorrow).

Gender neutral clothing means boys and girls and those who identify as a third gender, intersex, or no gender wear whatever uniform that they feel ‘right’ in be that a skirt, trousers, shorts or a dress; and that the school rules are applied equally to all. Better still, scrap uniform altogether and instead develop a set of guidelines applicable to all that ensure safety and fairness such as, no heels, no obvious branding logos etc.

What gender neutral clothing is not about is covering up flesh and stifling individual expression by making everyone the same. So although Piers Morgan’s objection is coming from a quaint, but frankly last century Chauvinism (yawn), I do get his discomfort and I strongly urge Priory Academy to have a rethink and engage with their student body – who will already have the solution – and roll out a gender neutral uniform policy that really is what it says it is.

Love to hear from you Cancel reply

Reflections from a Consultant Clinical Psychologist

The Jones Approach
Filling the pail

"Education is not the filling of a pail, but the lighting of a fire." - As W. B. Yeats never said

My views on Teaching & Education

Moving back to Australia after ten years living overseas